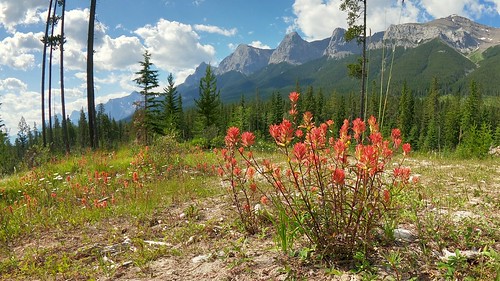 You may have seen this beautiful and colourful plant on a recent adventure through the forest. It is commonly named ‘paintbrush’ or ‘prairie fire’, the genus is Castilleja, and in July and August it is in full show in the Canadian Rockies (where I took this photo) and, I imagine, throughout the rest of its wide range in North America.

After taking this photo at Cold Shoulder, on the trails of the Canmore Nordic Centre, I sat on the picnic table to consider what I could observe and learn at this rest stop near the border with Banff National Park, 6.5 km from the Day Lodge, a legacy of the 1988 Winter Olympics. Without considering the geology of the Bow Valley and backing of Mount Rundle, I decided to consider the flower, its place in the habitat, the plant’s connection to science history and what contributions are being made by current research on this plant.

I know from my activity on the photographer’s platform Fickr that I am not alone in posting photos of Castilleja. I have seen comments on my photos telling me that this beauty is a favourite wildflower for many individuals. Since 2009, Mark Egger, a renowned Castilleja expert, has been sharing some of his thousands of images of this vascular plant genus on Flickr. He has been on a 35-year mission to document all the known species of the paintbrush plant and he has described seven species new to science.

When I asked Mark how he got started on such a project, he tells me that “it all started in the late 1970s, when my long-standing interest in nature started shifting from birds to wild plants. A friend once explained the anatomy of paintbrushes, and I started looking for different forms. Eventually, a mild interest turned into an obsession. I also corresponded with other Castilleja researchers, and that opened up new opportunities. By the late 1980s, I spent much of my vacation time from my job as a public school science teacher going off to all corners of the western hemisphere in search of the nearly 200 species.” 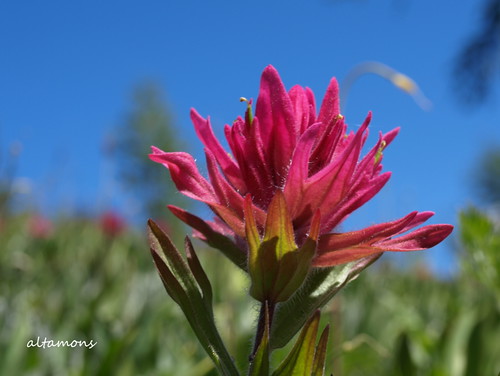 Castilleja, the plant
It takes an expert to determine the exact species of Castilleja, but most of us non-specialists can spot a paintbrush as easily as we can recognize a dandelion. The most interesting feature is that the colourful part is not the actual flower petals. The sepals of the flower, collectively called the calyx, are the showy and brightly coloured part of the plant we all observe. A closer inspection reveals an inconspicuous greenish tube-like structure which is the true flower. What we don’t see at all is the root system of this plant. Castilleja is a hemiparasitic plant: it is autotrophic in that it produces its own chlorophyll and photosynthesizes (C3), but it also taps into the root system of other nearby plants to boost its intake of water and nitrogen. Castilleja, in this habitat
Only considering this sample of one shown in my photo, the plant demonstrates an example of secondary succession. We can see this is an area where the original forest has been cleared, perhaps by fire or logging. Regardless, the poor-quality soil has been colonized by grasses, small flowering plants, and some small bushes. Lodgepole Pines are beginning to grow in a few parts of the opening and White Spruce are growing over at the edge of the forest in the shade of the taller trees. Under these conditions, a hemiparasitic plant like Castilleja will use the grasses and other plants as a source of nitrogen, but by its very nature of producing a disproportionate share of the biomass in the open area, ultimately it will also make a greater proportionate contribution to soil formation.

Castilleja in science history
It must have been an exciting time for scientists in the early 18th century. The scholars were not called scientists yet, that term would take another century to come into use. New specimens of plants and animals were being collected throughout the world as collectors were travelling out to explore areas new to Europeans. One of the most significant contributors to the biological sciences was Carolus Linnæus (1707 – 1778). He travelled, he collected and studied specimens and he was sent additional specimens by other scholars. And he gave us the ‘binomial nomenclature’, our genus and species system of naming all living organisms. I have not discovered evidence that he knew Domingo Castillejo (1744 – 1786), but their lifetimes overlap, and Castillejo was also someone known for collecting specimens of wild flowers, determining how to coax them to grow in Spain and being a correspondent for the Royal Botanical Garden of Madrid. I have no doubt that they at least knew of each other and probably exchanged a few plant species as well. Another Spanish polymath, José Celestino Mutis (1732 – 1808) a known friend of both Castillejo and Linnæus, suggested the name Castilleja for the paintbrush genus to honour his Spanish colleague.

Castilleja in recent research
I wondered if there was any recent research using the genus Castilleja. It seems these plants are being used for a variety of experiments. In one study, Erika I. Hersch-Green hybridized closely related species of Castilleja that had unique pollinators based on colour to determine the role of ploidy variation on gene flow. She indicated that the yellow flowers were visited by black swallowtails (Papilio polyxeneson) and bumble bees (Bombus sp.) and the scarlet flowers pollinated by only sweat bees. Hersch-Green then used hand pollination to create hybrid plants. Her studies indicated that “Polyploidy likely plays a large role in shaping contemporary and historical patterns of gene flow among these species.”

I indicated earlier in this blog post that species level identification is very difficult and best left to the experts. One sophisticated method scientists use is DNA barcodes. At some point, a known species has a small stable DNA segment sequenced and the information is stored in a DNA barcode library such as the International Barcode of Life. This is especially useful in a genus such as Castilleja. In 2017, a major study reported in ‘Applications in Plant Sciences’ details the potential use in building a barcode library from the plastomes (chloroplast genome). Follow-up studies may lead to a better understanding of the evolutionary clade and classification of the complex and fascinating genus Castilleja.

Did I mention that Castilleja linariifolia is the state flower of Wyoming?